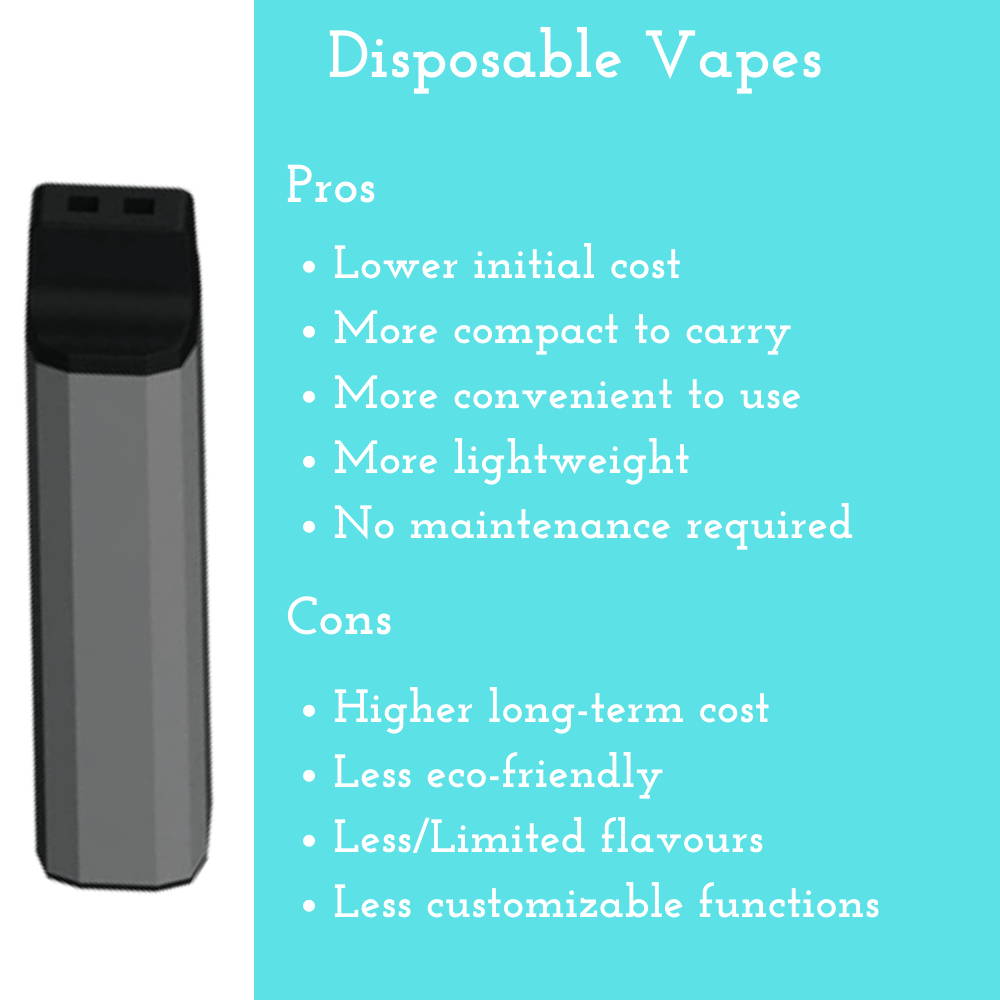 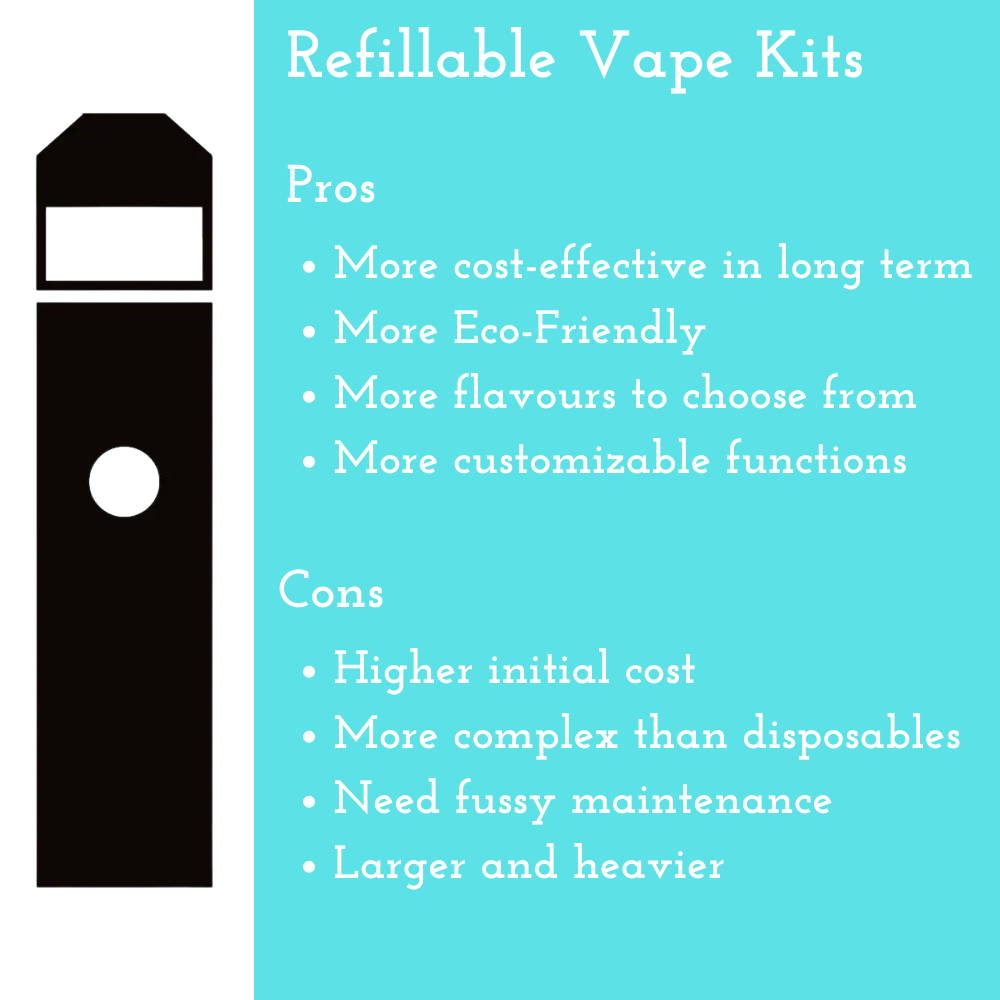 Disposable vape is also known as closed system vape because it cannot be refilled or recharged, once the battery is depleted or the e-liquid runs out, it should be disposed properly and replace it with a new one to go on vaping. As the above picture shows, a disposable vape requires lower initial cost, and generally cheaper than a pack of normal combustible cigarettes. It is the ultra convenience and portability that make disposable vape so popular among the consumers. It does not require any maintenance as well, no refilling, no recharging, no cleaning/replacing coils. All you have to do is to properly dispose of it when you run out a disposable vape.

However, there are also a list of drawbacks of a disposable vape. The most prominent aspect is that disposable vape would cost you much more money in long-term vaping period than refillable vape. Here is the quick math:

Smaller body means smaller battery and less internal hardware which make disposable vape with less customizable features. It is made for vape and go, hardly equipped with airflow control or wattage control features. Since it is an integrated device, the flavour is limited as well because you can not remove the cartridge from the device.

It is worth mentioning that disposable vape though seem not very eco-friendly, recently more and more manufacturers start to make low-carbon disposable vapes - they use recyclable materials like cardboard to make vape shells, for example, Riot Squad Q Bar Disposable Vape

and DotMod Dot E Disposable Vape are environment-friendly disposable vapes. Consequently I believe that the disposable vape would be more sustainable in the near future.

Refillable vape generally refers to open system vape for it can be recharged, refilled with e-liquid, and it can be partly removed or replaced. Whereas, there are a number of different types of refillable vape kits and generally they are divided into MTL vape kits, AIO(all in one) vape kits, and DTL vape kits. A MTL vape kit is a compact vape that is much like a disposable vape, delivering an authentic mouth to lung vaping experience; A DTL vape kit often comes in a hulk body, heavy but powerful and multi-functional - you can adjust the airflow and wattage, replace coil to DIY your own direct to lung vaping experience; AIO vape kit, literally it assembles MTL and DTL vaping styles into one single vape device, smaller than DTL vape, bigger than MTL vape, it is a versatile vape device.

As mentioned above, refillable vape is a high cost-effective option for long term vapers. While it may be more expensive in the initial cost because you’ll have to buy a vape kit and e-liquids. Vape juice for refilling the pod/cartridge or tank is rather cheaper compared to the e-liquid in the disposable vape. What’s more you can also DIY your own flavour of vape juice by blending in different flavours and types of e-liquids. With sufficient e-liquids, a refillable vape kit would work for you for a long time which means there will be less material or battery wastage so it is more eco-friendly.

Speaking of the drawbacks of refillable vape, fussy maintenance always bothers us. If you are an experienced vaper who uses a mod vape, then I assume cleaning/changing the coil, building a tank, refilling the tank, recharging the device, and adjusting the menu are not difficult for you, but they are rather fussy and annoying to some extent. Furthermore, an AIO vape kit and a DTL vape kit are often in large size and heavy weight which means they are not portable for daily carry.

What should I choose?

Comparisons and differences are illustrated clearly above the paragraphs and charts, if you are first time vaping, a disposable vape is highly recommended; If you are an experienced vaper and want to upgrade your level, then it is time to switch to a refillable vape(open system vape), trust me there will be a brand new world of vaping waiting for you.

Guide to No Nicotine Disposable Vape