Lost Vape is one of the leading manufacturers in the vape industry that devotes to developing pod-based vape devices. They established in 2014 but became well-known in 2018 due to the very popular Orion DNA GO. It boasts two successful series - the Quest and the Orion. Here we will introduce their latest release in Feb 2020.

The new Lost Vape Orion Q-Ultra Pod System is the latest AIO device in 2020 from a seemingly never-ending run of releases in the Orion family. With the release of the Orion DNA Go followed by the Quest version, Lost Vape go with the latest pod mod trend with the brand new Q-Ultra Pod kit. The Q-Ultra has the same Orion appearance while featuring the variable wastage instead of the preset outputs. It has longer battery life, more powerful output and larger e-liquid capacity compared to its predecessors. The screen design and the RBA deck make it stand out. If you have missed the Orion Q-PRO, you should read this review in detail. 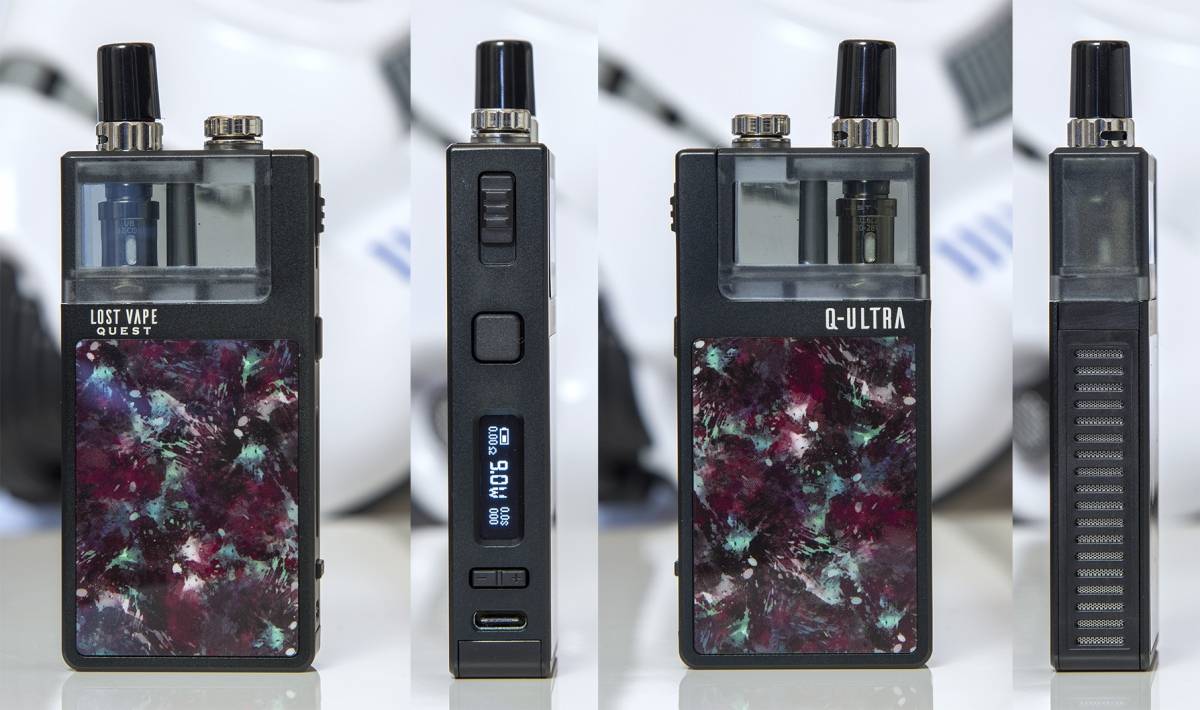 The Lost Vape Orion Q-Ultra is the latest rendition in the ever-growing Orion line, which had the Orion DNA Go, Orion Quest, Orion DNA Plus, and the Orion Q Pro. The appearance and design of Q-Ultra are similar to its previous versions. Constructed from the aluminum alloy, it is well-machined and solid. The Orion Q-Ultra measures in 105mm x 43.2mm x 16.5mm, which is bigger but still compact enough to fit your palm and slip into your pocket. It feels a little heavy in your hand due to the 1600mAh built-in battery. The added 0.69-inch OLED screen is right under the fire button. The two adjustment buttons are clicky and the Type-C charging port is at the base of the mod.

The Lost Vape Orion Q-Ultra uses the innovative track and catch system for installing and securing the pod cartridge. You should insert the pod back-end first (the mouthpiece side) and push down the on the refill top until you hear a click. The pod can be removed from a slider switch on the side of the device. The pod has a proprietary Delrin drip tip, which is comfortable between lips. The dual-slotted adjustable airflow at the base of the drip tip can be adjusted from a knurled ring for MTL and DTL vape. The filling port is large for easy refills. The threading on the top cap is nice and the o-ring seals well. 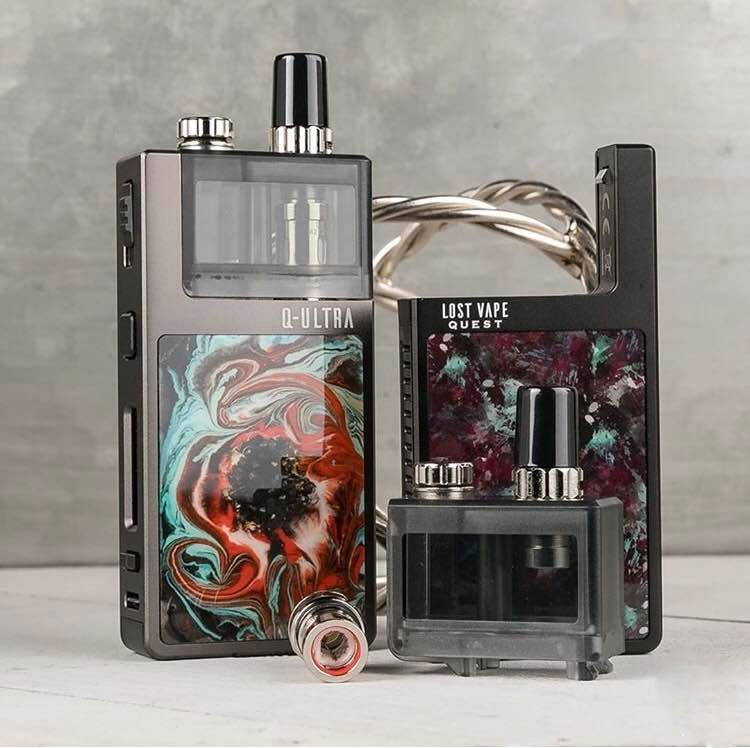 The Lost Vape Orion Q-Ultra is a variable wattage pod device. It has a 0.69-inch OLED, which is the first Orion with a display. It shows the battery level, resistance, wattage, puff count and vape time counter. The screen is bright but the font is a little bit small. Powered by 1600mAh internal battery, the Q-Ultra can fire from 5W to 40W, which can be adjusted via the plus and minus buttons in 0.5W increments. The battery can be fully charged in 70min via the Type-C charging port at 1.5A. It doesn't support pass-through. Without a DNA chipset, the Q-Ultra cannot connect to the Evolv software. There are a couple of combination key features below. 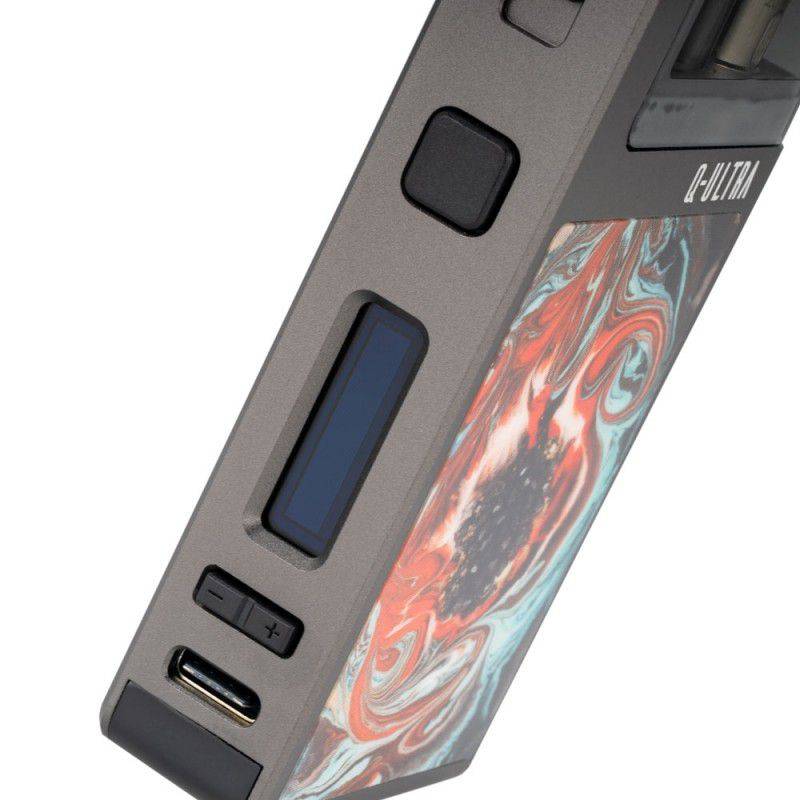 The Quick Guide of Orion Q-Ultra: 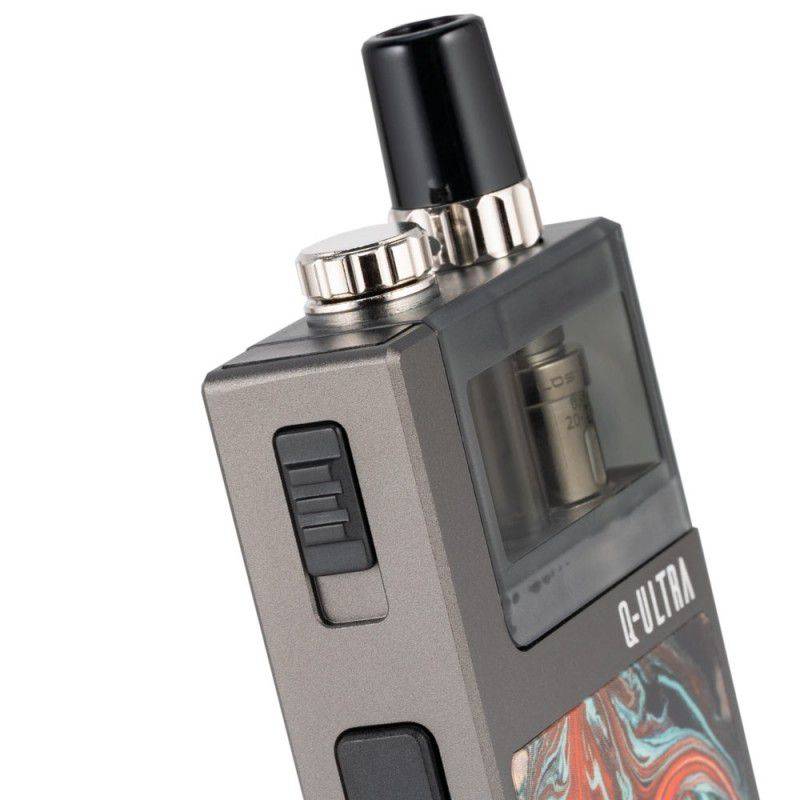 The 4ml Q-Ultra Pod has the top filling system and features the adjustable airflow control, which is similar to its predecessors. It is primarily designed for DTL vape with 0.6ohm pre-installed coil while also including a 1.0 ohm MTL coil in the kit. The 0.3ohm coil and the RBA deck are sold separately.

The pod features a locking mechanism, which snaps the pod very securely. You can simply remove the pod by pressing the sliding switch. The plastic pod is slightly tinted, you can view the juice level clearly. The proprietary Delrin drip tip is comfortable and features the adjustable airflow at the base. The tolerance is great, which is much better than other devices from the Orion line. The generous filling port is sealed by the threading top cap. The mouthpiece is removable. Once you take it off, it will be loose accidentally. So I recommend you not trying to remove it. 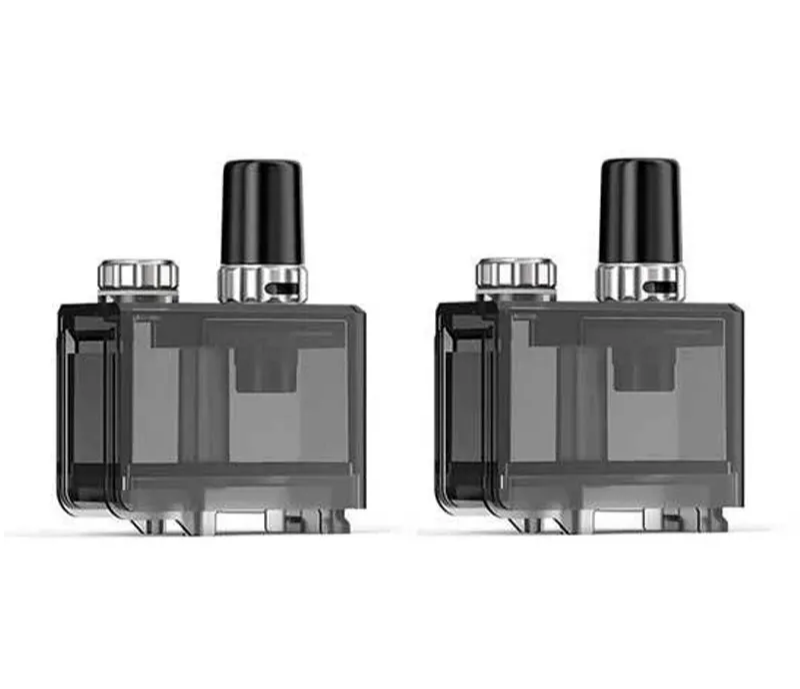 The airflow is integrated into the mouthpiece onto the pod. Two small holes can be adjusted from fully open to fully closed for both DTL and MTL vape. You can think of it as a DTL device, which brings you the flavorful DTL draw with fully open airflow. I cannot get a tight MTL draw with both slots closed. It fails to provide a genuine closed off airflow MTL vape. 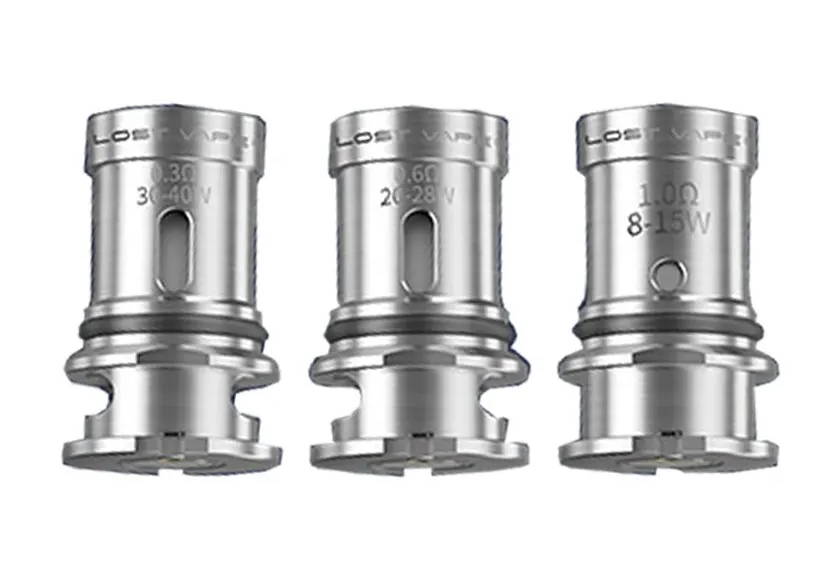 The RBA coil has two tall cylindrical posts and features bottom airflow along with two wicking channels. It includes a 510 adapter to fit on a regular vape device or ohms reader. It also comes with 2 basic coils, cotton, o-rings, grub screws and an allen key. Please note that the Orion Q-Ultra Pod is only compatible with the new Ultra Boost coil series. Those pods and coils can not be used with other Orion devices. 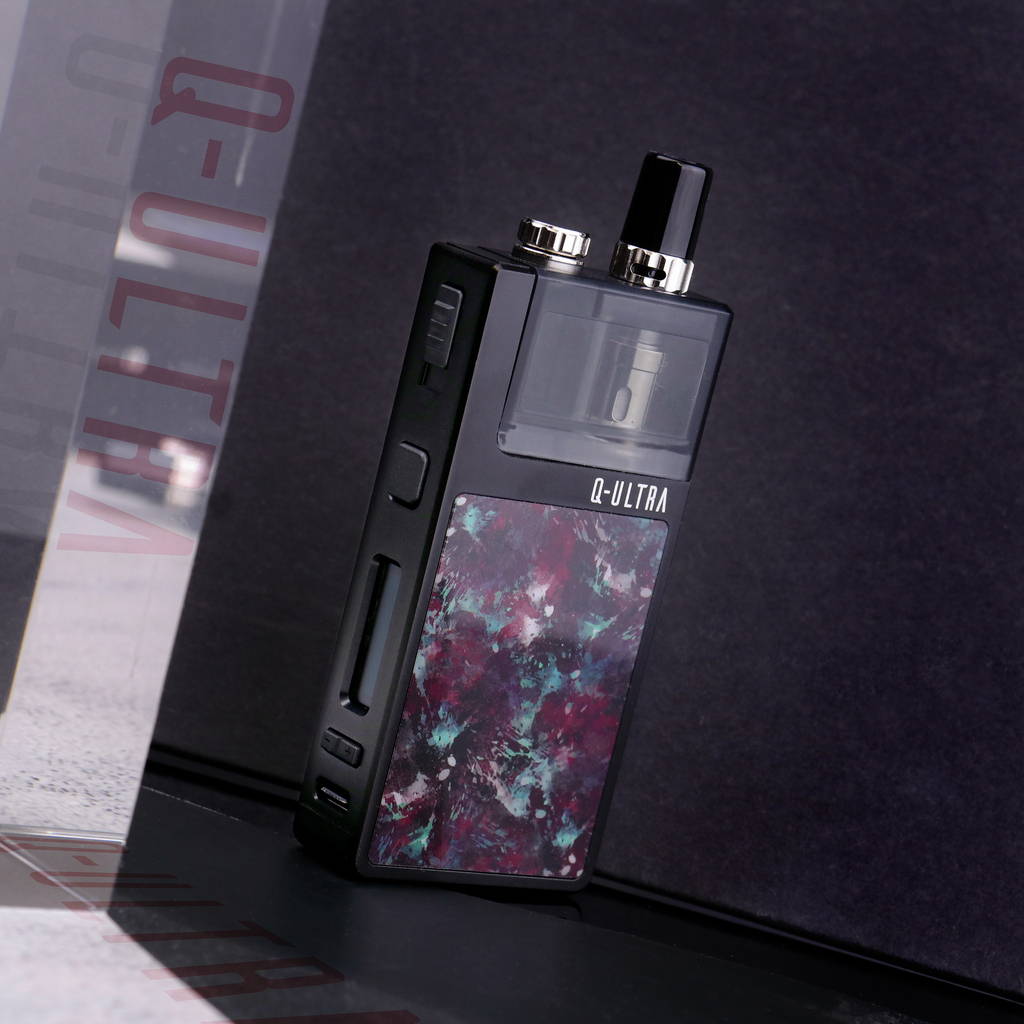 There are many Orion variants, with and without a DNA board. The Lost Vape Orion Q-Ultra has a similar appearance to its predecessors while bringing more evident changes. It has a more powerful battery with 40W maximum output. It provides both MTL and DTL vape with adjustable airflow. You can quite comfortably use it for a restrictive DTL draw. If you get the fiddly wicking right, the RBA deck is a great choice that does improve the flavor. If you are looking for a pod-based DTL vape, I will highly recommend you to try the Orion Q-Ultra. But please keep in mind that the coils are not cross-compatible with other Orion pod kits.