Following the highly appraised success of the original VINCI pod mod, VOOPOO have released several different versions to expand their VINCI series. So far we have had the VINCI, VINCI X, VINCI R, VINCI VW and now the VINCI Air.

Equipped with the same GENE.AI chip, the VINCI Air has a 900mAh built-in battery for 30W maximum output, and two airflow modes like its previous models. It has a 4ml pod cartridge and features draw-activated and button-activated vaping. The VINCI and VINCI X were comparable to a full-featured vape kits, while the Air is a more portable and easier device like SMOK Nord.

The previous VINCI devices perform well and have a great battery life. Do we really need a simplified version? Let’s read the review to find out. 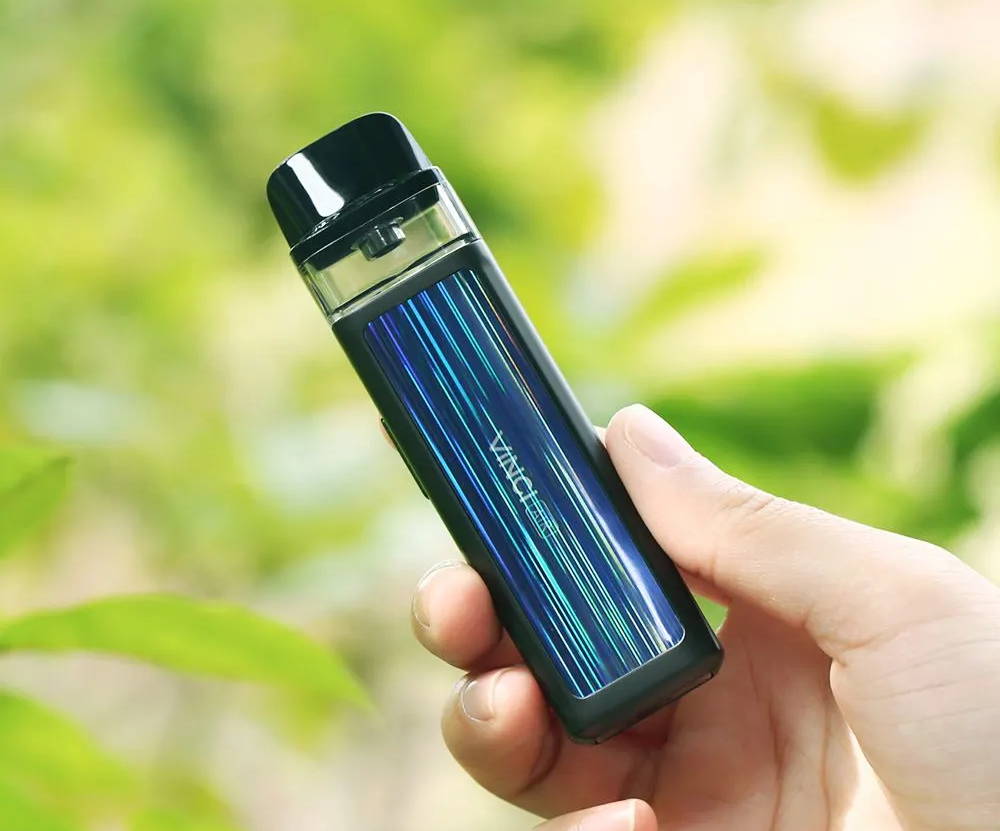 The first impression of VINCI Air was how small it is. It looks like original VINCI but it is nowhere near as thick or bulky. It measures at 101mm x 27mm x 18mm and weighs only 91g, which is not a very tiny pod vape but much thinner and smaller than the rest of VINCI devices. It is pretty slim and sleek that fits your palm comfortably and slips into the pocket easily. VOOPOO also claims that the Air is 20% lighter and 30% thinner than the original Vinci, making it an ideal device for travel use.

The VINCI Air has the similar aesthetic design to the original VINCI. The elegant profile with different panel stickers looks shiny and eye-catching when light hits the device. Made of sturdy zinc alloy with matte finish, it can withstand a few drops and provide a decent grab. The corners are all rounded and the body is streamlined for good hand feel. 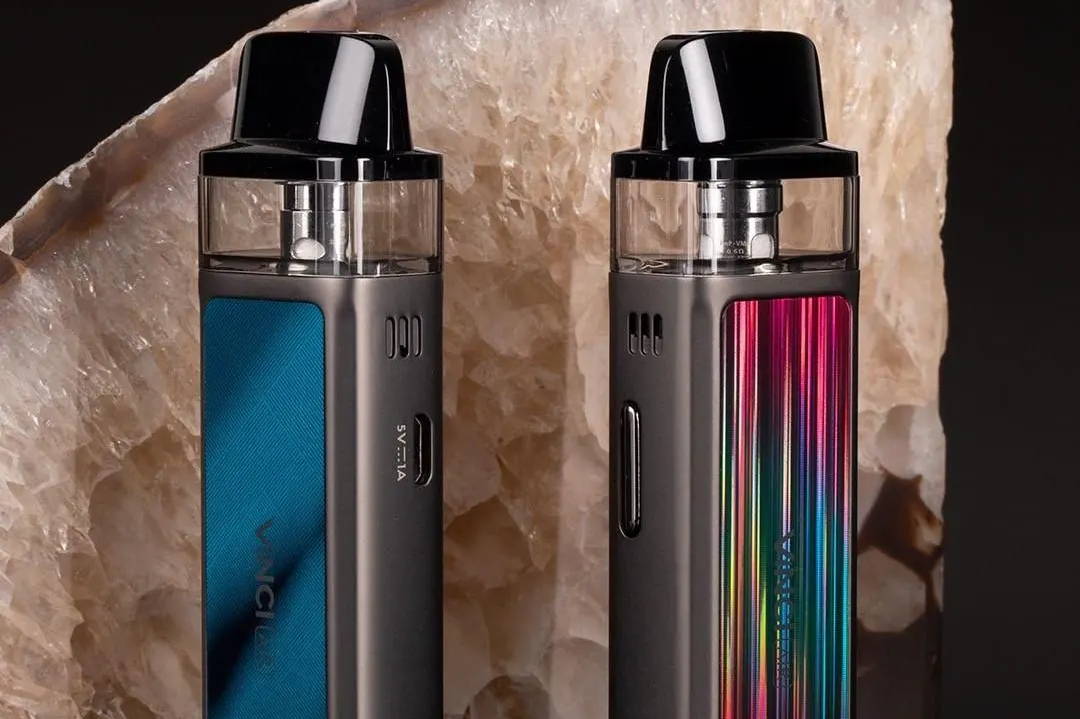 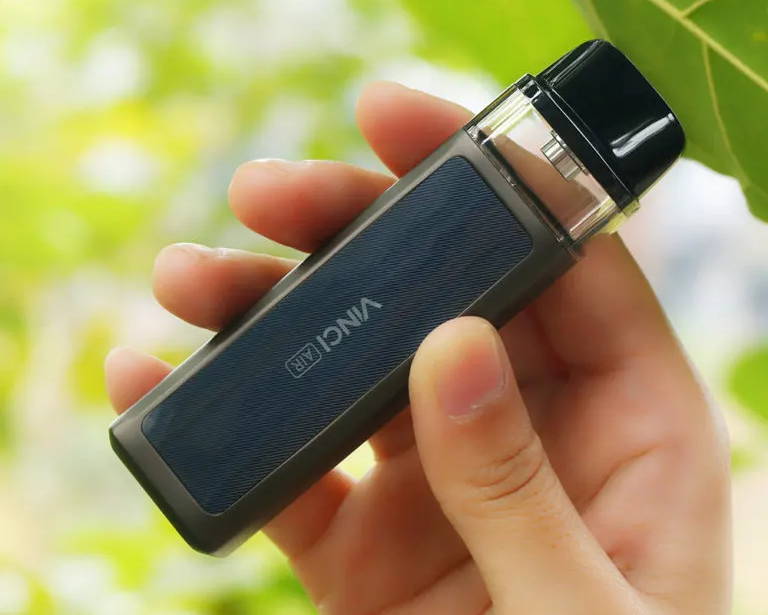 To make the new VINCI Air thinner and smaller, the battery capacity is only 900mAh, which is not bad but it could have been a little bit more as the SMOK Nord integrates a 100mAh battery. It still utilizes the traditional micro-USB port with 1A charging speed. The device can be fully charged over 60min. You can view the exact batter level while charging. It dose not support pass-through.

The GENE.AI chipset provides variable wattage from 5W to 30W and records your puff counts. It can automatically recognize the PnP coil type and limit the maximum wattage of each coil to prevent dry burnt. The 0.6ohm mesh coil cannot be set over 28W and the 1.0ohm coil cannot be set over 15W. The smart chip also ensures instant firing speed. The device is activated immediately and the coil heats up fast when you press the fire button to vape.

The screen is not as versatile as its predecessor but it still displays the important vaping information like wattage, battery level, resistance, puff counter, etc. The VINCI Air is both draw-activated and button-activated. You can press the fire button to vape or simply inhale on the mouthpiece to take a draw. The operation of VINCI Air is pretty simple and straightforward. 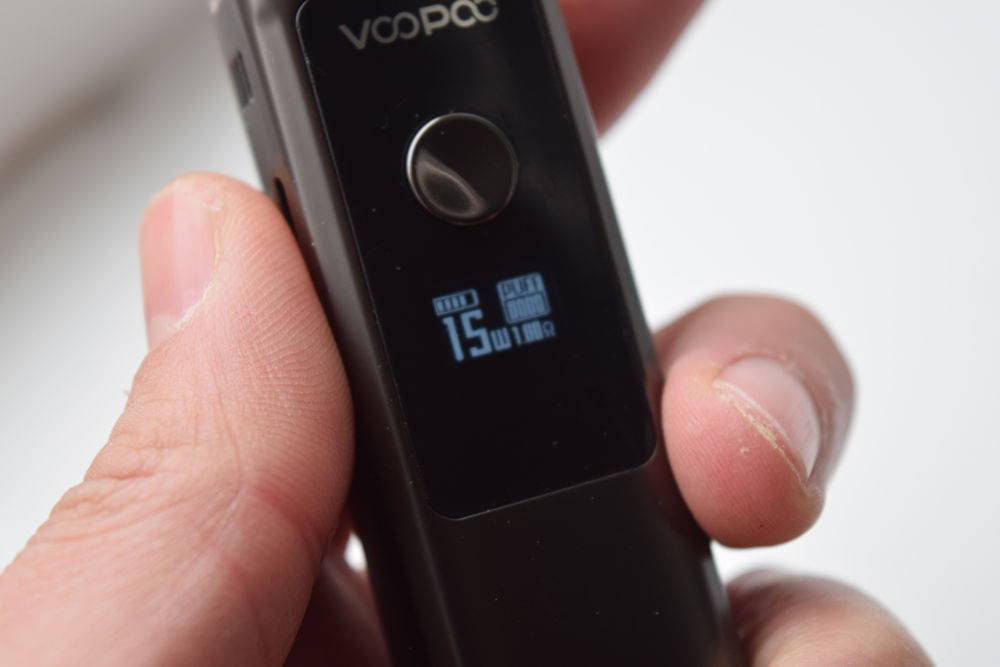 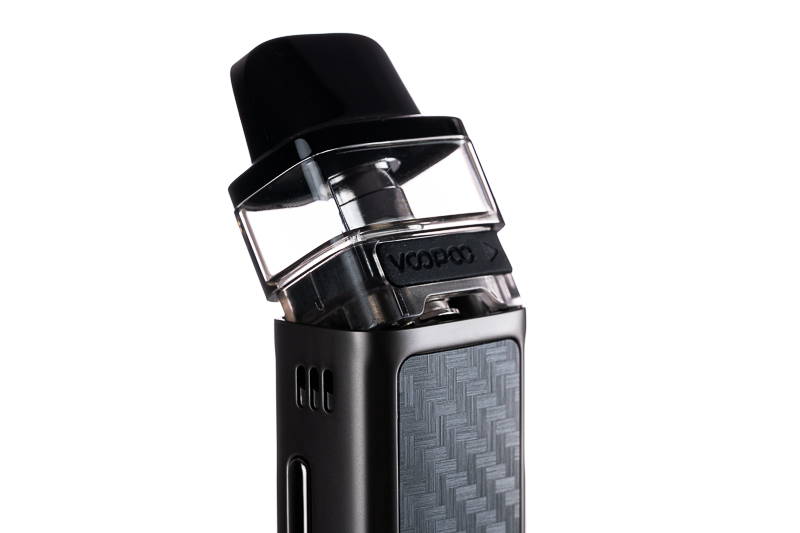 The pods of VINCI Air is held in place with strong magnets without wiggle. They are much flatter and smaller compared to the rest of VINCI pods. So the Air is not compatible with other VINCI pods. The VINCI Air Pod holds 4ml of e-liquid and utilizes the VOOPOO PnP coil series with a plug and play method. Just press the coil into the pod from the bottom. The filling port is large on the side of the pod and covered by a rubber plug which is very thin and flimsy. You may need to take a little bit longer time to remove the plug. The pod window is clear. You can easily view the juice level.

Apart from the shape and size difference, and the pod compatibility, the VINCI Air is crafted with a very efficient dual airflow control system, which can be adjusted by rotating the pods 180 degree. The airflow intake depends on the pod orientation. The two airflow options are significantly different. The 3 vertical airflow holes on one side are a bit over halfway open for a restrictive DTL hit, while the other side has only one small airflow hole at the base of the middle slot for a loose MTL draw. 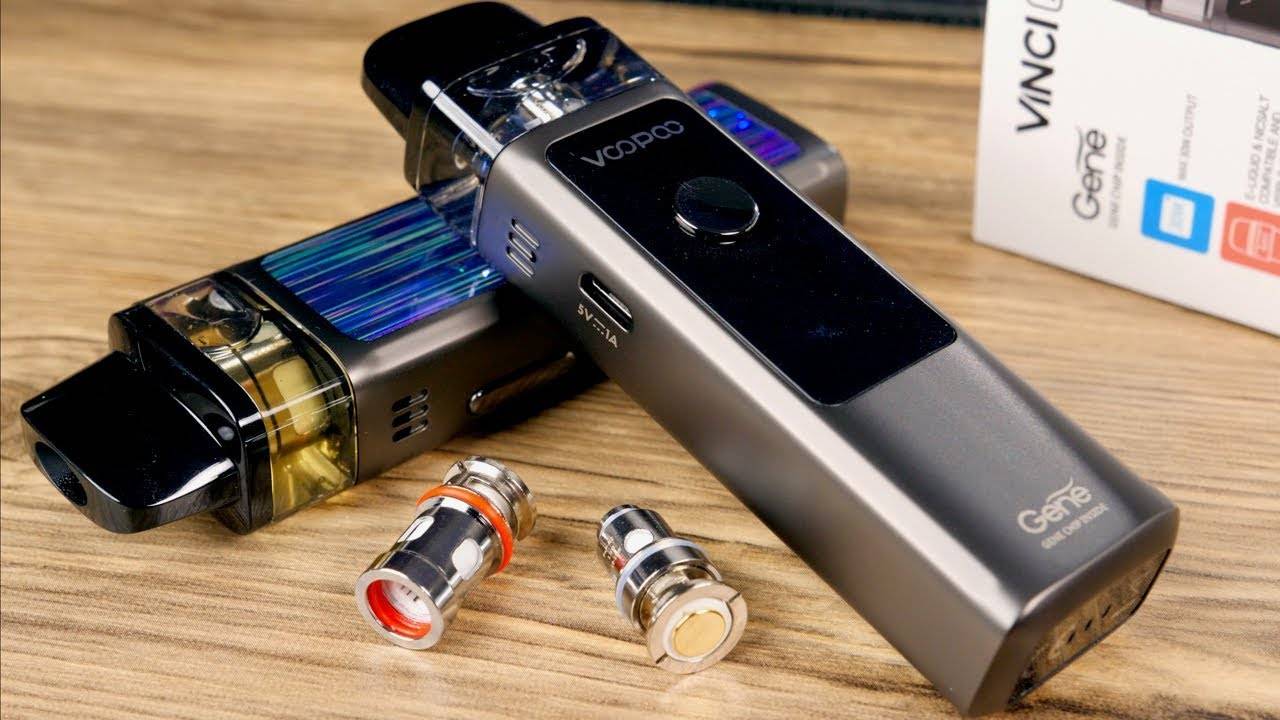 The kit comes with two different coils. Both of them are plug-and-play and press-fit into the bottom of the pod. They are not pre-installed. So you can choose which one to start with. To get started, you should prime your coil with a few drops of e-liquid onto the wick. Then insert it into the pod. Remove the rubber plug and fill your favorite juice. Leave it at least 5min to get the coil fully saturated.

The 0.6ohm mesh coil is a very flavorful middle-power coil. It is meant for 3-6mg regular e-juice for DTL vaping. It wicks 70VG easily with no struggle at all. It perform efficiently and the flavor is strong and pure. The cloud is massive but it doesn’t produce as much vapor as the VINCI X with 0.3ohm coil. When using with the open airflow, you will get a flavorful restricted DL draw.

Unlike the VINCI and VINCI X, the 1.0ohm coil on VINCI Air can do the real MTL vape. It may not be perfect but it is the best MTL I have had from the VINCI line. It is meant for nic salt with restricted airflow position to bring you the concentrated flavor.

In my point of view, the 0.6ohm is a clear winner due to its better performance, but the 1.0ohm coil is a better choice for travel use due to the lower battery capacity. I have had no dry hits with the two coils and no leaking either. The coil is long-lasting. I have used the coils with more than 5 refills. The flavor is still consistent and strong. 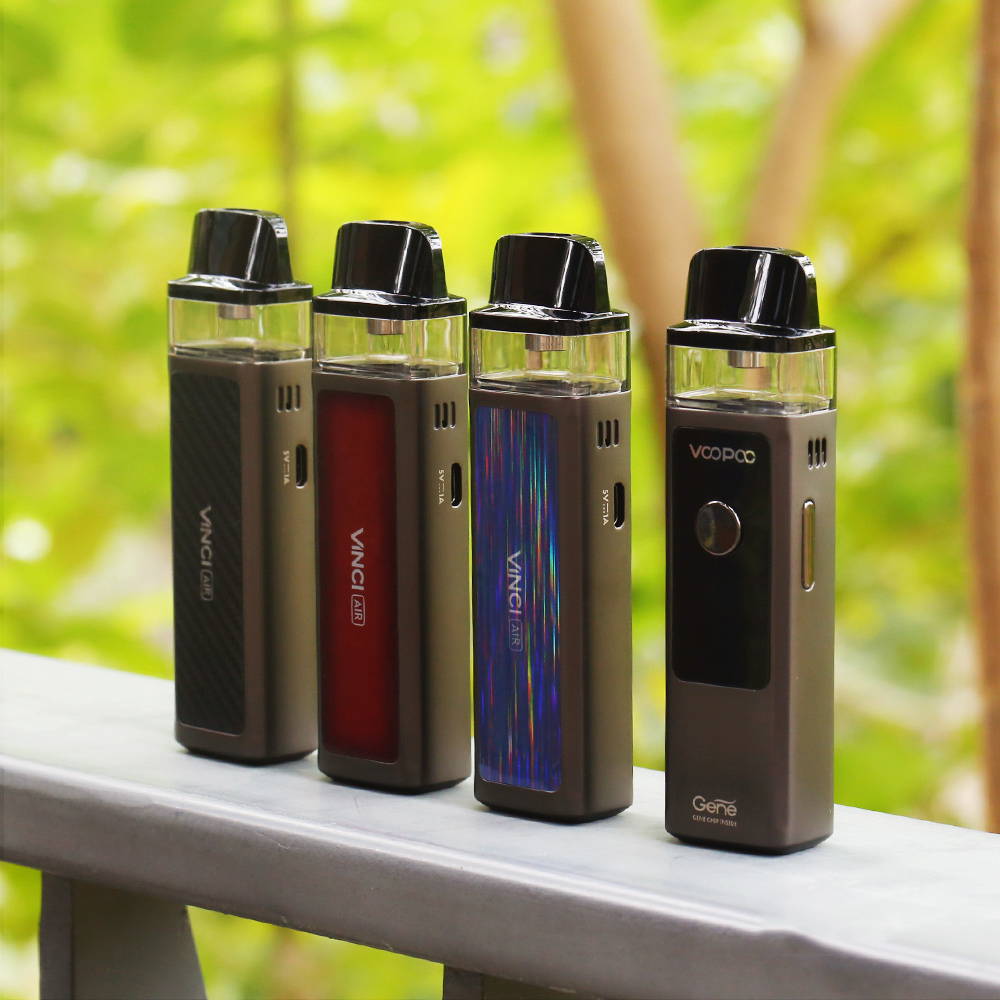 The VOOPOO VINCI line grows rapidly and keeps high quality and great performance so far. The VINCI Air as their latest rendition is designed to be a more compact and easier device. VOOPOO integrate a 900mAh battery into a smaller and thinner body for the ultimate portability. Like the previous VINCI devices, the Air allows for two airflow options for a loose MTL and a respective DTL vape. The pods is tiny and holds 4ml of e-liquid. It utilizes the 0.6ohm mesh coil and 1.0ohm regular coil from the popular PnP series to bring you the amazing flavor and decent vapor production.

The limitation of the VINCI Air is also obvious. The battery capacity is not sufficient and it has less features than the rest of the VINCI family. It is not bulky but not as small as SMOK Nord due to the larger pod of the Air. The 0.6ohm coil drains the battery faster. So I recommend you to use the 1.0ohm coil when you go out. If you loved the features and performance of the VINCI or VINCI X, but found them too large to carry around, the VINCI Air will be a good option. It is lightweight and easy to take, and the performance is almost as well as the original VINCI.