Wotofo and Matt Culley from Suck My Mod have teamed up again to bring you a new MTL RTA for builders who prefer high nic salts. Matt Culley from SMM is an American reviewer with a huge fanbase in the vape crowd. They have worked together on the Serpent SMM RTA in 2017. The new COG RTA is 22mm in diameter and with an innovative variable gear-like airflow mechanism allowing you to adjust the airflow right under the coil without making use of inserts. Made of high-grade PCTG, it holds 3ml of e-liquid.

The COG RTA is just the second MTL atty to ever come from Wotofo, which is the follow-up to the popular STNG RDA. It is very unique with some innovative features. Wotofo and Matt Culley have tried to bring something new to the airflow game. Keep reading the review to see if the new airflow system more than just marketing hype. As always I will give my honest opinion on the Wotofo COG MTL RTA. 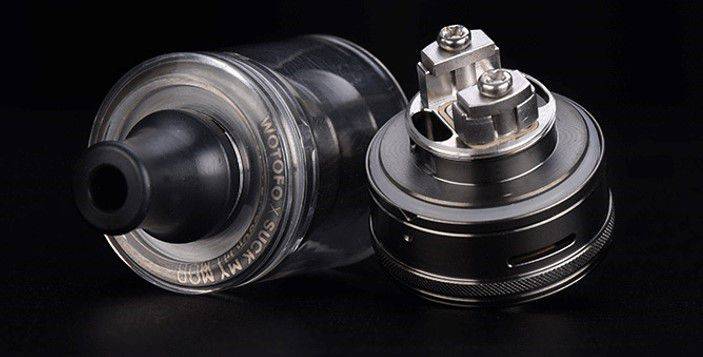 The COG RTA is what you would expect from Wotofo as far as quality goes. It is very well machined. The O-ring tolerances are perfect and the threads are smooth. The COG is 22m in diameter, which fits most of the vape mods on the market. The 3ml of e-liquid capacity is more than enough for an MTL RTA. The tank is made of food-grade PCTG with an inner steel chimney and top cap.

The semi-transparent plastic top cap creates an interesting effect, making the bell seem like some type of exhibit. It is screwed firmly and made of two pieces with a steel washer. You can easily access your two decent sized top filling ports. The drip tip is a standard 510 that’s double o-ringed. The tank section is sturdy and impact-resistant, which can withstand some rough handling. The chimney attached to the top of the tank is easy to disassemble allowing you to take it to pieces for cleaning. I really like the looks of the COG RTA. It has a certain type of high-end feel. One downside to notice is that there is some awkward and ugly molding on the chimney, the CE mark, and the bin carvings on the bell. 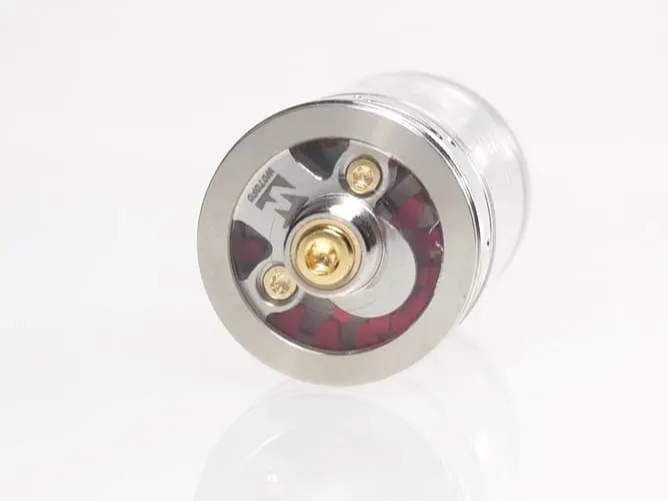 The Wotofo COG has a Kayfun-style deck with two spring-loaded clamps to secure the coils. The single-coil deck is nicely laid out and well thought out, which is super easy to build on. The coils can be fitted legs up or down according to preference, so the orientation of the wraps is not important. The raised edges help to avoid the coil legs from sliding out when you tighten down the clamps. Just make sure that the wire ends are positioned at the bottom side of your coils before mounting. Flathead screws are less likely to strip if you have a good screwdriver. The box comes with a screwdriver, but if you have a nice range of flathead screwdrivers, I would recommend you use one of those instead.

Flipping the tank over, there is a clear plastic disk around the 510 connection. You can see the red plastic gears that control the airflow, which looks pretty cool.

The innovative airflow control mechanism makes the COG stands out among other MTL tanks on the market. Rather than controlling the airflow by a cyclops style airflow control, the Wotofo COG RTA utilizes the bottom airflow ring to adjust the airflow right below the coil via a gear mechanism, which controls the air intake directly under your coil.

There is a rotating ring on the outside that clicks into one of 5 positions. The airflow ring is connected to a red plastic gear. When you turn the airflow ring at the base of the RTA, the mechanism will turn with it. Each step is connected to a small ring that in turn drives a second little cog directly under your coil. Rotating the airflow ring rotates the COG inside. The elliptical air slot allows air in, and the adjustments are made via the cog system. The airflow will be channeled through the hole of the ring and hit the coil from directly under it. There are five dimples set in the ring and the IDs of them are 0.8, 1, 1.2, 1.4, and 1.6 mm. 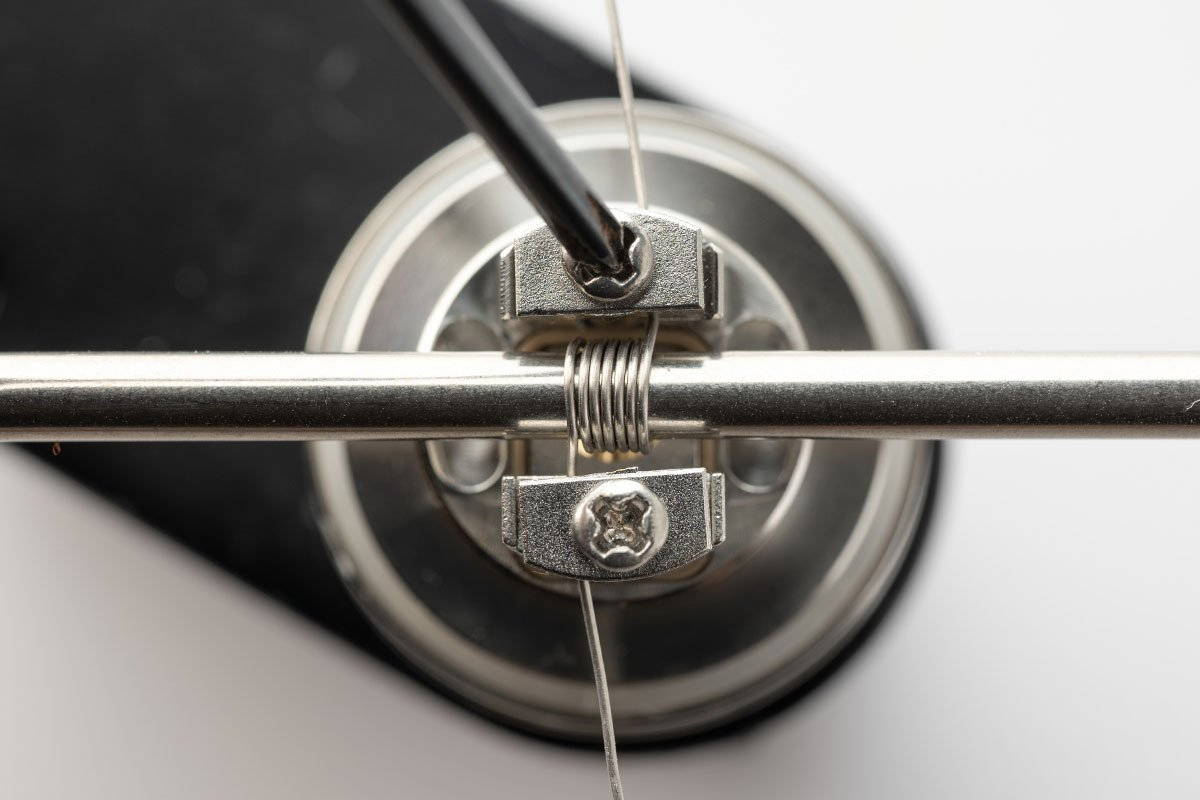 Building and wicking are pretty easy on the Wotofo COG, the deck can accommodate up to 3 mm ID coils. Just unscrew the two springy clamps, they will rise automatically. Place your coil ends under the clamps and screw the clamps down. Then cut your coil legs flush to the deck to prevent shorts. Dry fire your coil then use the ceramic tweezers to remove hot spots. Take your cotton and wick it up. I suggest cutting your leads at 1 - 2 mm allowing your wick ends to float a bit fluffed up. The best way to wick the COG RTA so you get a moist, flavorful vape without dry hits is to not have your cotton too tight and give it a good trim on the ends. Prime your cotton with a few drops of e-liquid. Then screw the chimney and tank and fill the tank. Screw the top cap and the COG RTA is ready!

The airflow on the COG is smooth. There is not much difference between the five airflow levels, but it is more in the quality of the air intake than the quantity. They can be more diverse. The draw is warm and flavorful. The taste is punchy and pure. It performs well with all vape juices I tried. The COG does produce a great among of thick, cloudy vapor. Very satisfying! I am sure it will deliver a perfect vape for flavor chasing MTL vapers. But if you want a very tight MTL or a versatile airflow, it may not the best MTL RTA for you.

The Wotofo was trying to use an innovative airflow control mechanism for a more enjoyable vaping experience. But it just doesn’t work all that well. The COG fails to offer enough difference in the 5 airflow settings. The airflow levels are too similar to one another. The flavor and vapor production are great that is to be expected from Wotofo. The build quality is top-notch. The gear-like mechanism looks pretty cool and I do like how it looks. Coil building and wicking are pretty easy. If you prefer an RTA that goes from a bit tight to a slightly airy MTL, I will highly recommend you to use the Wotofo COG RTA. It doesn’t get very tight.